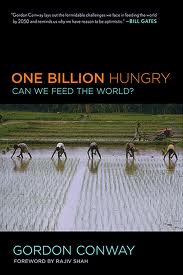 In One Billion Hungry, Sir Gordon Conway, one of the world’s foremost experts on global food needs, explains the many interrelated issues critical to our global food supply from the science of agricultural advances to the politics of food security. He expands the discussion started in his influential book The Doubly Green Revolution: Food for All in the Twenty-First Century, emphasizing the essential combination of increased food production, environmental stability, and poverty reduction necessary to end endemic hunger on our planet.

BUY THE BOOK ON AMAZON

Conway succeeds in sharing his informed optimism about our collective ability to address these fundamental challenges if we use technology paired with sustainable practices and strategic planning.

The theory of change central to this book was first documented in Gordon Conway’s The Doubly Green Revolution: food for all in the 21st century first published in 1997. The conception of the Doubly Green Revolution was an outcome of the deliberations of a small panel, chaired by Gordon Conway, commissioned to develop a vision statement for the Consultative Group on International Agricultural Research. The vision was presented and adopted at a meeting of ministers of overseas development from the developed countries and of agriculture and natural resources from the developing countries.

What began as a second edition of The Doubly Green Revolution quickly developed into a largely new book reflecting what has happened globally in the intervening years: the growing number of people who are chronically hungry, the devastating impact of the food price spikes and the challenges we face if we are to feed a world subject to climate change. Alongside these challenges there have been enormous strides in technical achievements: revolutionary improvements in crop and livestock breeding, successes in application of ecological principles to agricultural production and real examples of exciting farmer innovation. While most of the concepts and arguments remain as relevant today as then, and in some cases more so, the book has many new elements and material to take into account these changes, resulting in a roadmap for urgent global action to tackle hunger.

“In One Billion Hungry, Gordon Conway lays out the formidable challenges we face in feeding the world by 2050 and reminds us why we have reason to be optimistic. History shows that we can reduce hunger and poverty, but to make a lasting difference we will need to help small holder farmers sustainably increase their productivity.”

“We will not have a fair and secure world until we overcome the global challenge of feeding our ever-increasing population. Gordon Conway’s insightful book addresses the complex issues of achieving global food and nutrition security”

WRITE YOUR OWN BOOK REVIEW ON AMAZON